Rare Gone With the Wind Final Shooting Script; signed and inscribed by David O. Selznick, Vivien Leigh, Olivia Havilland and many others 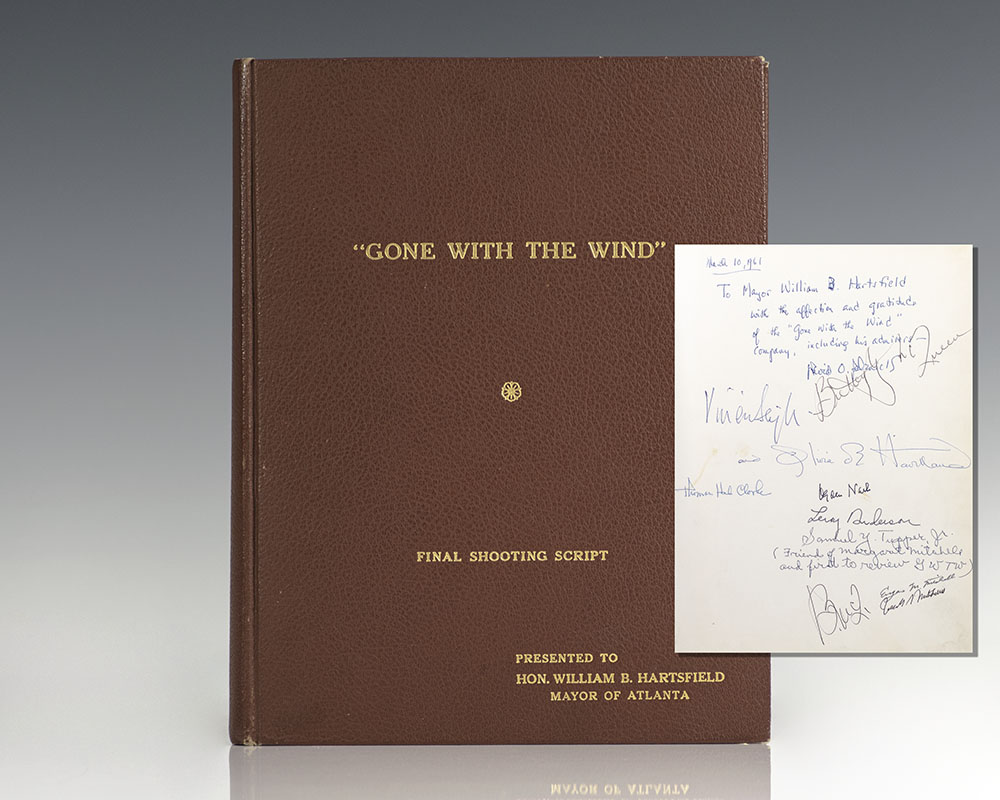 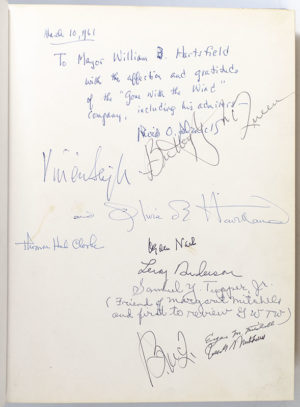 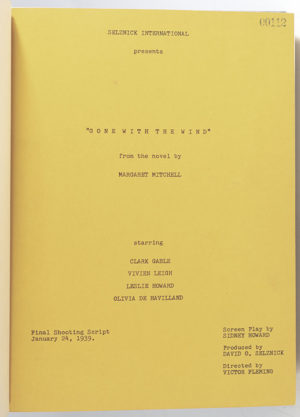 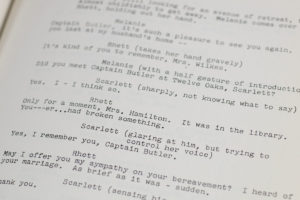 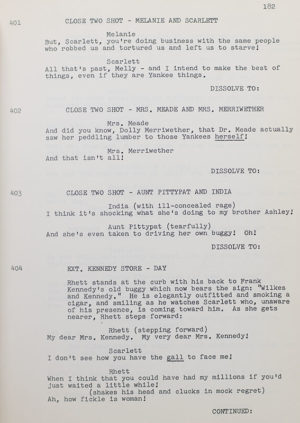 Final Shooting Script from David O. Selznick’s epic historical romance film Gone with the Wind, signed and inscribed by him, Vivien Leigh, Butterfly McQueen, Olivia de Havilland and many others. Folio, original mustard wrappers bound in full pebbled leatherette with gilt titles and tooling to the spine. Association copy, inscribed by Selznick on the third free endpaper, “March 10, 1961 To Mayor William B. Hartsfield with the affection and gratitude of the “Gone with the Wind” company, including his admirer – David O. Selznick.” The recipient, Mayor William B. Hartsfield, attended the film’s special re-premiere gala in Atlanta for which Selznick had a number of script copies made (thought to be fifty) for his company beginning with number 00100, this is number 00112 and one of the few to come to market. Laid in is an original black and white photograph of Mayor Hartsfield with Vivien Leigh at the gala. Additionally signed by actresses Vivien Leigh, Butterfly McQueen, and Olivia de Havilland, Samuel Tupper (a friend of Margaret Mitchell’s whose review of her novel was the first to be published), writer and comedian Ogden Nash (Selznick was considering him to write the script for the planned Gone With the Wind musical), Leroy Anderson (one of America’s premier composers with whom Selznick was discussing the Gone With the Wind musical), and Eugene and Joseph Mitchell (Margaret Mitchell’s nephews). In fine condition. With a set of Margaret Mitchell First Issue stamps postdated June 30 1986 laid in. A superior example with noted provenance.

Produced by David O. Selznick, directed by Victor Fleming, and adapted from Margaret Mitchell's 1936 novel, the 1939 film Gone With the Wind tells the story of Scarlett O'Hara, the strong-willed daughter of a Georgia plantation owner and her romantic pursuit of Ashley Wilkes, who is married to his cousin, Melanie Hamilton, and her subsequent marriage to Rhett Butler. The leading roles were played by Vivien Leigh (Scarlett), Clark Gable (Rhett), Leslie Howard (Ashley), and Olivia de Havilland (Melanie). The film was immensely popular when first released and received particular praise for its casting. It became the highest-earning film made up to that point, and held that record for over a quarter of a century. It is currently regarded as one of the best films of all time and in 1989, the United States Library of Congress selected it for preservation in the National Film Registry.