Photograph of President Lyndon B. and Lady Bird Johnson; Signed by Both 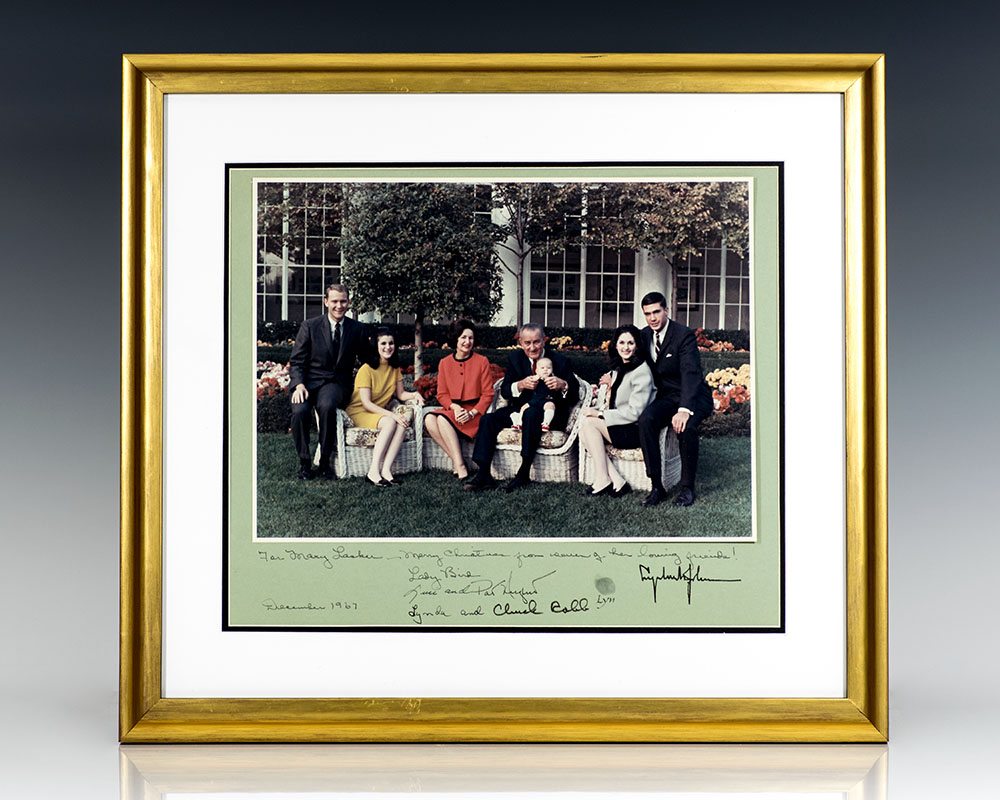 JOHNSON, Lyndon B. and Lady Bird.

Large photograph of President Lyndon and First Lady Lady Bird Johnson. Signed by Lyndon B. Johnson and additionally inscribed by Lady Bird, as follows, “To Mary Lasker from her friends Lady Bird Johnson Christmas 1966. The recipient Mary Lasker was an American health activist and philanthropist, who worked to raise funds for medical research and founded the Lasker Foundation. She helped convince Eleanor Roosevelt to endorse Lyndon Johnson’s efforts to become the 1960 Democratic nominee, and Lady Bird glowingly mentions Lasker in her book A White House Diary. Lasker was the recipient of the Presidential Medal of Freedom in 1969. The photograph measures 8.25 inches by 11.5 inches. Double matted and framed; the entire piece measures 15 inches by 17 inches.

President John F. Kennedy delivered his Inaugural Address on January 20th, 1961 from the eastern portico of the United States Capitol. In his opening words, he greeted Vice President Johnson, President Eisenhower, Vice President Nixon, and President Truman, all of whom were in attendance in addition to notable literary figures Ernest Hemingway, John Steinbeck, and Robert Frost who recited his poem ‘The Gift Outright’ at Kennedy’s request. The first to be delivered to a televised audience in color, Kennedy’s address is considered among the best presidential inaugural speeches in American history. Kennedy and his speech writer Ted Sorensen studied the speech-writing of President Abraham Lincoln when crafting the address which included Kennedy’s resonating request, “And so, my fellow Americans: ask not what your country can do for you; ask what you can do for your country.” Following the address, Kennedy was joined on the platform by his predecessors Harry S. Truman and Dwight D. Eisenhower, and future presidents Lyndon B. Johnson, Richard M. Nixon, and Gerald Ford; notably the largest gathering of the ‘presidential fraternity’ in American history. The Pre-Inaugural Ceremonies, Inaugural Speech, and Proceedings were all diligently documented by White House photographer Robert L. Knudsen, who chronicled almost three decades of major White House events including the 1948 and 1952 elections of President Truman, the autopsy of President Kennedy in 1963, and President Nixon's 1974 farewell in the wake of the Watergate-scandal.