Anne Frank: The Diary of a Young Girl.

Uncorrected Proof of Anne Frank: The Diary of A Young Girl 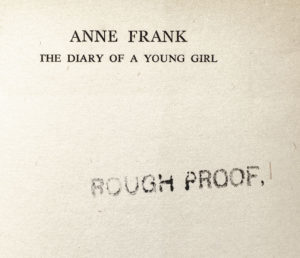 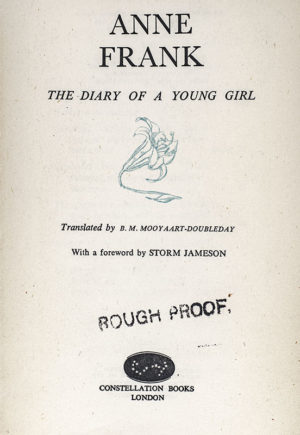 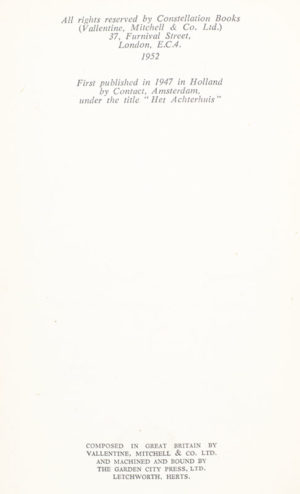 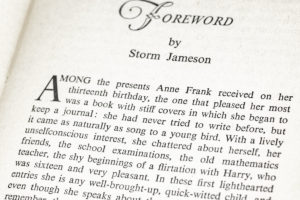 Anne Frank: The Diary of a Young Girl.

Uncorrected proof of the first American edition of “one of the wisest and most moving commentaries on war” (Eleanor Roosevelt). Octavo, original wrappers. Introduction by Eleanor Roosevelt. Translated from the Dutch by B.M. Mooyaart-Doubleday. This is the first example we have seen, as only a few examples would have been produced for limited in-house production. Rare and desirable.

Born in 1929, Anne Frank received a blank diary on her 13th birthday, just weeks before she and her family went into hiding in Nazi-occupied Amsterdam. Here diary was later discovered in the attic in which she spent the last years of her life, Anne Frank's remarkable diary has since become a world classic—a powerful reminder of the horrors of war and an eloquent testament to the human spirit. In 1942, with Nazis occupying Holland, a thirteen-year-old Jewish girl and her family fled their home in Amsterdam and went into hiding. For the next two years, until their whereabouts were betrayed to the Gestapo, they and another family lived cloistered in the "Secret Annex" of an old office building. Cut off from the outside world, they faced hunger, boredom, the constant cruelties of living in confined quarters, and the ever-present threat of discovery and death. In her diary Anne Frank recorded vivid impressions of her experiences during this period. By turns thoughtful, moving, and amusing, her account offers a fascinating commentary on human courage and frailty and a compelling self-portrait of a sensitive and spirited young woman whose promise was tragically cut short.